Last week I bought a brand new trombone. Following my teacher's recommendation, I made an appointment at Musik Bertram in Freiburg and spent a good few hours in their practice room trying out different instruments. I fully expected to get a light, small-bore, jazz or pop music tenor trombone. Instead, I somehow chose a medium-bore, classical Bach 36, with rose brass bell and everything.

What made the difference compared to the other instruments I tried is the incredible, full sound this instrument is able to produce. My guitarist Max, who was with me at the store, put it this way:

The other instruments are good, too. But this one sounds like it has a built-in compressor.

So, amazing sound, yes, but there's a drawback. This instrument is heavier than anything I have played before. And its geometry is weird, too. I'm still figuring how to hold it comfortably.

Luckily, there's YouTube. And there's one of my favorite YouTubers: Trent Hamilton. Trent is a New Zealander that collects brass instruments like others collect stamps. He also plays them very well, and he plays all of them. Naturally he knows how to properly hold - even a heavy - a trombone:

*: x reps of slow (!) heel drops with a bent knee, then x reps with a straight knee. Repeat on the other side. The weight is held on the side that's doing the drops. Full range of motion, but don't hold the bottom stretch (my damaged achilles tendon doesn't like that).

After a 11 day training break due to Covid I have to ramp back up slowly into my ongoing volume cycles of clean & press and one-handed club swinging. I am also trying to start a cycle of Goblet squats in order to add ... more squats to my training. I think I need them.

*: 3 rung reverse ladder goes 3 left, 3 right, 2 left, 2 right, 1 left, 1 right
**: x reps of slow (!) heel drops with a bent knee, then x reps with a straight knee. Repeat on the other side. KB is held on the side that's doing the drops. Full range of motion, but don't hold the bottom stretch (my damaged achilles tendon doesn't like that). 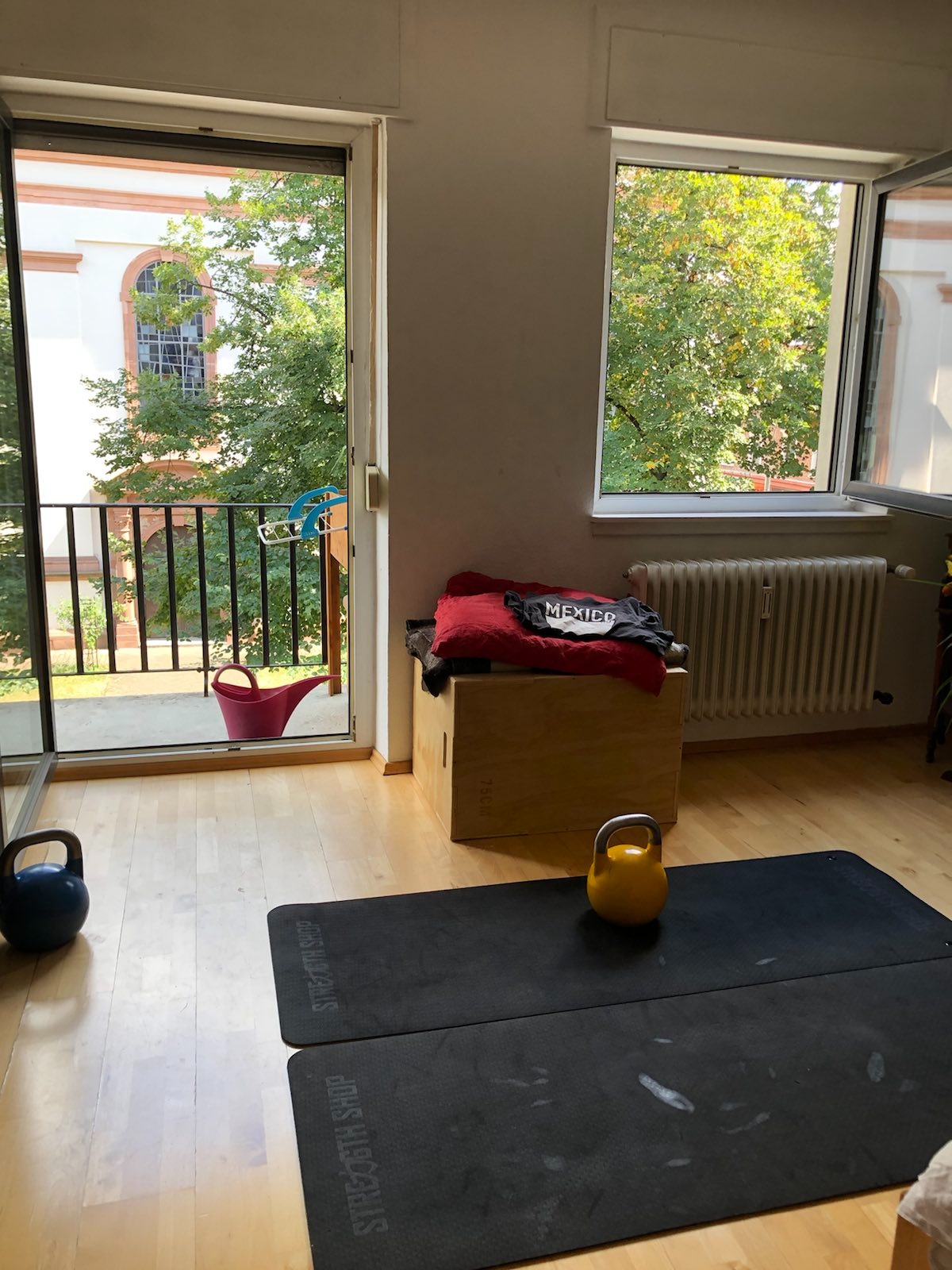 Basically everything I need for my training at the moment. Plus clothes - sometimes. 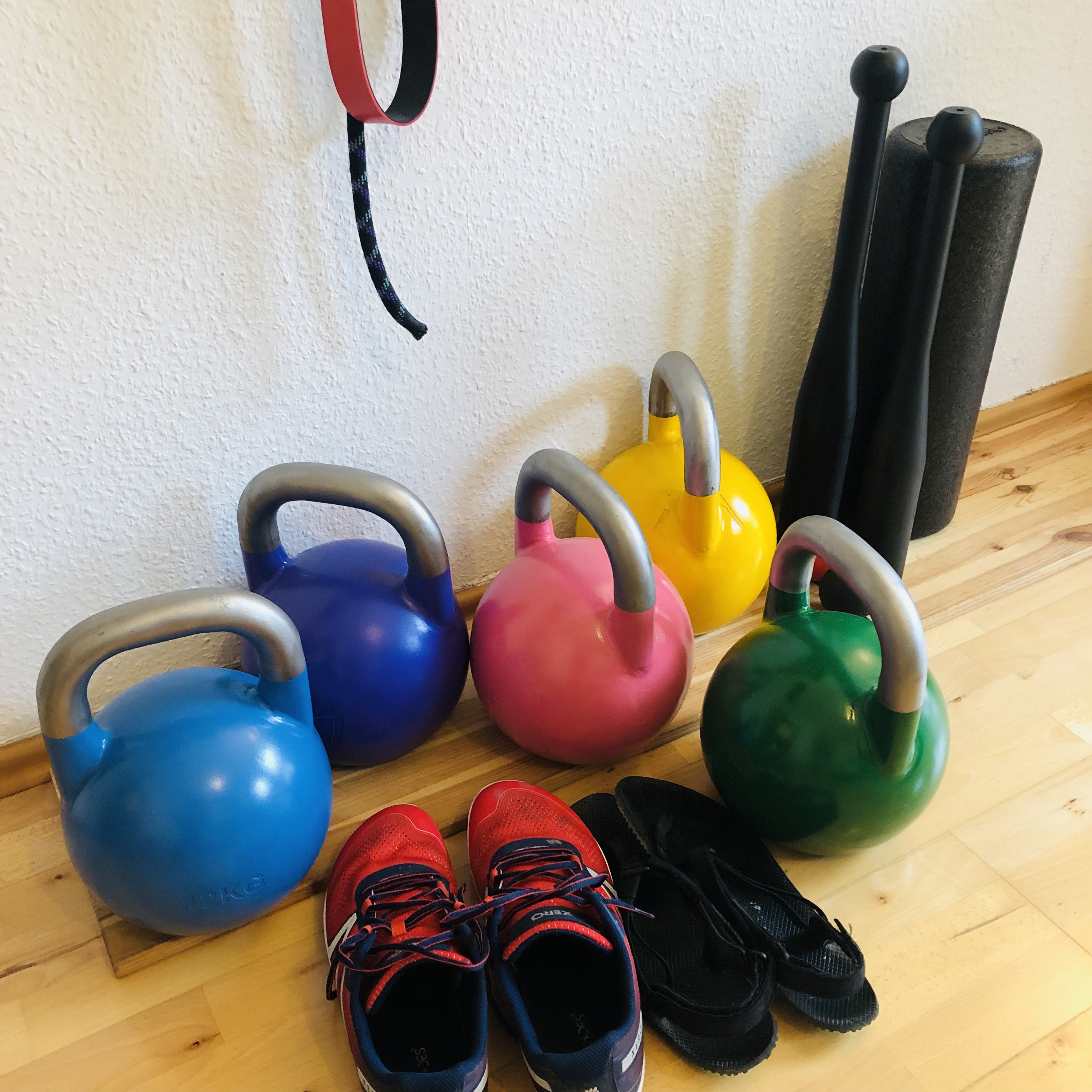 Vim config of the week: I can now copy & paste between vim and the rest of my system. This has been something I wanted to have for a long time, and the Stack Exchange answer sounds like it's standard stuff. In any case, I am now directly yanking and pasting to and from the system clipboard anytime I use y or p in Vim.

And all with a simple

For mostly unknown reasons I want to delete my Google account at some point in the future. The Google services that I am regularly using are Search, Maps, and - increasingly - YouTube. The latter is the only service that really benefits from an account that remembers subscriptions, lists and the history of watched videos.

What I will continue to use are RSS readers. And it turns out that you can (still) subscribe to YouTube channels via their RSS feeds. Reddit is your friend and provides the answers:

The URL for a channel's RSS feed is

where the channel ID can be found in the html source of the channel page or may even be part of the channel URL. In any case, I now subscribe to my YouTube channels via boring, old RSS feeds.

Update 2020-10-15: My very good friend Zeitschlag tells me that for those channels that do not have set a custom URL, it's enough to just use the channel URL.

For example, Fat Freddy's Drop - the world's very best band btw. - has the channel URL https://www.youtube.com/channel/UCsLGIbOjsV8TFTco9cL6HHA. Those random characters at the end is the channel ID. When I add this URL to my FreshRSS instance, it finds the RSS feed no problem.

In the case of the hip, young, cool YouTubers like Armen Hammer at https://www.youtube.com/c/ArmenHammerTV, the channel URL doesn't include this ID but a custom name/slug/identifier. Here, you'll have to go the tedious way as described above.

I love cover songs. I love bands that take a good song and make it better. Bands like Cake, Reel Big Fish, Guano Apes, and Rainer von Vielen. Joe Cocker made a whole career of it.

That's why Napster was the best!. Napster had everything, every cover and live version anyone had ever published. Napster would have had this super, mega, uber amazing live version of Hard To Handle by the Black Crows, if Napster had survived until 2005.

Napster would have had this super fun rock version of the Temptations Get Read by Wishbone Ash.

I'm always trying to find cover versions of songs. Many times, there are amazing versions out there. And then there's Smokey Robinson's Tracks of My Tears. This song has many, many cover versions available on Spotify. Everyone in music apparently took a shot at it at one time. And they all failed. There's not a single cover version that makes the song better. And please don't go looking for the Bryan Adams recording of it. You're welcome.

It seems to me that in this rare case, the originial is the best there is, and noone can improve upon it.

I challenge everyone to show me that I'm wrong.

(Seriously. I recently started playing in a rock cover band, and I want my first proposal for a new song to be a real good one. A hard-rock version of Tracks Of My Tears would be amazing. I'll add the horn section myself.)

Update Sep 10th, 2020: There is actually a pretty decent cover version, recorded by Boyzone. It does not change the song in any way, but the production is superb, and the horn parts are really well done!

Recently, Nick and I published 3 episodes of Several Ways To Live in a single day. How did we do that, do you ask? Easy: